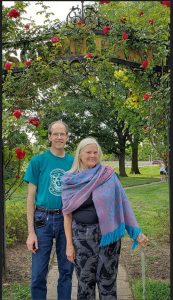 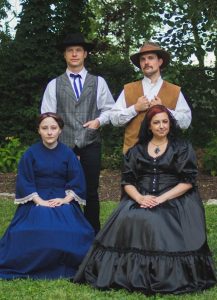 When he was 10 years old, he saw a live production of Shakespeare’s “Romeo and Juliet.” He wasn’t impressed.

“I could not believe how long it took,” remembers Galen Wilson, who distinctly remembers counting the times Juliet yelled “I come anon” to the nurse and wondering if the play would ever be over.

Wilson could not have guessed that he would not only come to love The Bard’s plays, but would end up producing them.

Along with co-producer Phyllis Tonne, Wilson has been staging outdoor productions of Shakespeare’s plays in the South Park historic district since 2008. They’re at it again and on the weekend of Aug. 26-28 will celebrate their 13th season with a production of “Twelfth Night,” one of the few Shakespearean comedies they hadn’t yet produced.

The free weekend event is open to all and takes place on South Park Green. Admission is free; audience members, who come from all over, need bring only a lawn chair or blanket.

The show goes on, rain or shine. If it’s rainy, the troupe moves into nearby Hope Lutheran Church. Wilson says the advent of Doppler radar has been very useful. “We were in the middle of a performance one year when it became clear rain was coming, but the Doppler said we should be able to finish — and pack up — in time. We dodged the rain by about 20 minutes that night. But it’s grand to perform under the stars of a cloudless night sky with a tiny bit of coolness in the air.”

Wilson says outdoors is the perfect theater venue for a COVID-19-world. Many cast members mask up for indoor rehearsals; audiences can socially distance by placing lawn chairs away from others.

Wilson and Tonne say they chose “Twelfth Night” because it’s a farce and perfect for a “let-your-hair-down” summer evening.

The comedy is not named because the action takes place on the Twelfth Day of Christmas but because it was designed to be played on the Twelfth Night, a holiday known for feasting, music and revelry.

“In Elizabethan England it was a day for turning social norms upside- down, for role reversals, for servants spoofing their employers, for crossdressing and for other minor tricks foisted on the unsuspecting,” explains Wilson. ” Think April Fool’s Day merged with Sadie Hawkins Day!”

Shakespeare weaves all those crazy elements into his plot:

Director Susan Robert originally thought of setting the show in the Old West in the style of the 1960?s TV series “Gunsmoke,” but since the play begins with Viola and the Sea Captain coming ashore from a sea wreck, she had to nix that idea: no ships ever got anywhere near Dodge City.

“So we chose another celebrated time and place in American history, the 1849 Gold Rush,” says Robert. “Shakespeare’s Duke Orsino becomes Sheriff Orsino; Lady Olivia is cast as the proprietor of Olivia’s Saloon and Hotel. And when money passes from one person to the next throughout the play, the characters even say: ‘There’s Gold!’ ” 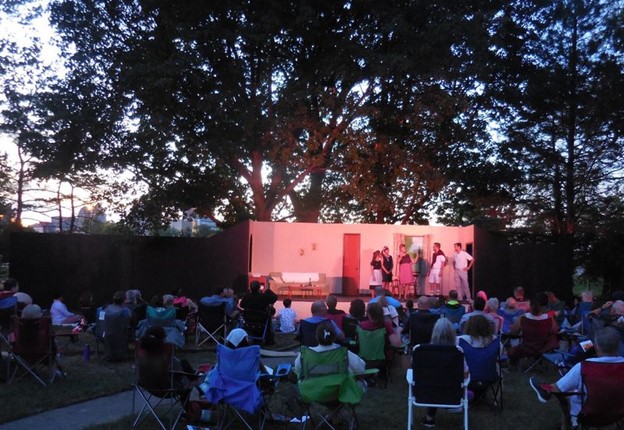 The stage in South Park Green (Hickory at James).

In addition to celebrating Shakespeare, these thespians enjoy celebrating the neighborhood. Last month, in honor of South Park’s 40th anniversary, current and former residents were invited to a festive reunion block party. About 200 people attended.

Karen Manovich, a former neighborhood president, says there’s something special about South Park that’s hard to find elsewhere. “We have lived here for 25 of the last 30 years. We returned to South Park upon retirement because we missed the friendships and community found here. I think the front porches, coupled with the closeness of houses, creates a physical environment where people interact regularly.”

Michael Dewey, who portrays Orsino, recently purchased the neighborhood’s oldest house and is one of the newest residents. “I hadn’t been in a play for many years,” he says. “It’s been a lot of fun and has brought something new to my life.”

Wilson says Shakespeare is timeless and universal. “Some people shy away from Shakespeare because they find the language difficult to understand,” he says. “But many of those barriers evaporate when a play is performed and the action carries the words’ meaning.”

Kelly Johnson, in the role of the Sea Captain, would agree. She’s lived in South Park for more than 20 years; it’s her ninth season with the company.

Johnson says it’s a delight to go through the process of bringing the words of these plays to life and discovering what they can mean. “Every year I learn from fellow actors and the director, and every year learning to inhabit a new character expands my understanding of people,” she says. ” Art is for everyone.”

Can’t find what you’re looking for… try our search!