Home ownership increases to 71.4%, its highest on record. 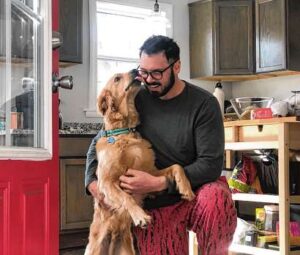 Matt Wilcox at home with his dog in the South Park neighborhood. Wilcox says he bought a home because it was cheaper than renting downtown.

Strong home sales last year helped the Dayton region’s homeownership rate climb to the highest level in at least 35 years and possibly much longer, according to a Dayton Daily News analysis of Census survey data.

“We did see a continued desire to buy homes into the pandemic,” said Julie Deacon, executive director of the HomeOwnership Center in Dayton. “We thought the demand would decrease with financial hardships.”

Dayton’s homeownership rate was the 11th highest in the nation among the 75 largest U.S. metro areas. The Dayton metro area includes Montgomery, Miami and Greene counties. But the local housing market still has some challenges and continues to have one of the highest homeowner vacancy rates in the nation.

Total home sales last year were up 4%, and average price, median price and sales volume all increased, according to data from the Dayton Realtors. About 17,305 home sales occurred in 2020 in Montgomery, Greene, Preble, Darke and Warren counties, Geier said. “Homeownership is critical to the region’s economy,” she said. “Plus, homeownership gives a sense of community … that rentals do not.”

Matt Wilcox, 27, said he decided to buy a home last year on Oak Street in the South Park neighborhood because it was cheaper than renting a downtown apartment. His monthly mortgage is hundreds of dollars less than what some of the downtown apartment complexes charge for rent.

Wilcox and his girlfriend moved to Dayton from Chicago so she can attend medical school. Wilcox said owning a house with a yard during the coronavirus crisis was a big relief because they have spent 95% of their time at home.

“It’s really nice to have a lot more space,” he said. “We were in a small, 500-square-foot, one-bedroom apartment in Chicago. “Now we have a 1,500-squarefoot, three-bedroom home.”

Purchasing a home last year felt a little risky, Wilcox said, because of the economic uncertainty. But he said he felt comfortable taking the plunge because he had a healthy savings. He also put his first stimulus check toward his down payment.

U.S. lawmakers have approved three rounds of direct stimulus payments that most Ohioans have or will receive. Most people received checks worth $1,200, $600 and $1,400.

Some residents who did not suffer financial hardship during the pandemic put their stimulus money toward buying a home, said Deacon, with the Home- Ownership Center. Many households also have spent less money in the last year, meaning they had more money for housing costs, Deacon said.

“They were no longer going out to eat, going to movies, going to outside entertainment, no child care expenses,” he said. Deacon also said the Memorial Day tornadoes of 2019 likely had an impact on homeownership.

A significant number of rental properties were destroyed by the storm, she said, and those former tenants might have had more home purchase choices than rental options. Additionally, she said, many people displaced by the tornadoes were offered homeowner incentives, including down payment assistance.

Homeownership builds household wealth for owners and future generations, and communities are better served when homes are owner-occupied instead of operated as rentals by outof-town investors, said Steve Naas, president of County Corp, which is Montgomery County’s private nonprofit that seeks to increase affordable housing.

Home prices have increased in the Dayton area but remain below the national average, Naas said, and often it’s cheaper to buy. He also said it is a seller’s market right now because inventory is tight.

Homeownership is important to neighborhood stability because homeowners often are deeply involved in their community and look to improve and increase the value of their homes, which benefits the tax base, said Jim McCarthy, president and CEO of the Miami Valley Fair Housing Center Inc.

Homeownership is the primary way that most people and families accumulate wealth and increase their net worth, he said.

But the Dayton region still struggles with blight and many homes are empty and deteriorating.

Get ready to sell stuff and make a few bucks on May 1st beginning at 9am, rain or shine!

Home improvements in a Landmark neighborhood

Spring is home improvement season. That means something special in a Historic District. To preserve the value of your Landmark property, check The Blue Book and apply for a Certificate of Appropriateness (CoA) from the Landmarks Commission before you start any work on the exterior of any buildings, fencing or landscaping.

We’re proud to have so many good neighbors doing business in South Park!